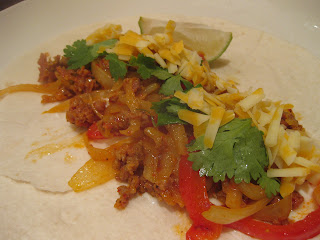 Phil and I checked out the Hamilton Farmer's Market on the weekend.  We were going to head East and go to the St. Lawrence Market, but at the last minute decided to try Hamilton.  If it wasn't for Phil's parents telling us about all the good deals and how great it is we probably wouldn't have know about it.

It's so much cheaper than Toronto.  I left with tulips, sourdough rye bread, tortillas, and some Mexican chorizo.  That's what led us to tacos on Saturday. 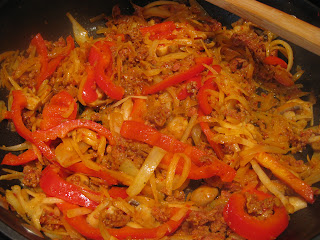 Cook the chorizo on medium-high heat breaking up with a spoon, about 5 minutes.  Toss in onion and mushroom and continue to cook for about 8 minutes, stirring occasionally.  Add the potato and cook for another 5 minutes.  Serve with tortillas and your favourite toppings. 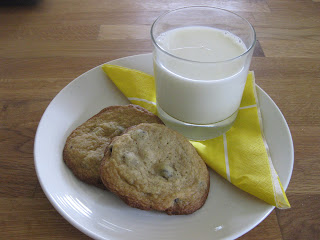 What a great way to start the weekend!  Crunchy edges and soft centres, make this the perfect chocolate chip cookie. I asked my mom if I could borrow her electric mixer for this recipe.  It's just one of those things I don't use since I don't bake much.  As I was using it I felt very nostalgic, remembering my mom making lots of meringues and cheese muffins with that mixer.   Recipe by Jim Lahey found in Bon Appetit Magazine. Ingredients: 1 Cup plus 2 Tbsp. of all-purpose flour 3/4 Tsp of kosher salt 1/2 Tsp of baking powder 3/4 Cup (1 1/2 sticks) of unsalted butter, room temperature 3/4 Cup (packed) light brown sugar 1/4 Cup of sugar 1 Large egg, room temperature 1/2 Tsp of vanilla extract 1 Cup of semisweet or bittersweet chocolate chips Makes about 20 cookies Arrange racks in upper and lower thirds of oven; preheat to 425F.  Line 2 baking sheets with parchment paper. Whisk flour, salt, and baking powder in a small bowl.  Using an electric mixer on 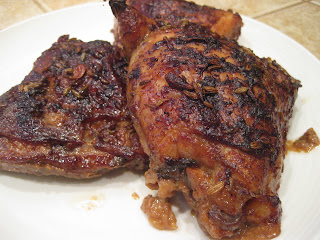 Late Sunday night Phil handed me an article he saved me from The Toronto Star.  It was something about the 'top 10 recipes of 2011'.  So far I've made one of the recipes and was very impressed.  This was one of the best chicken recipes I've tasted, and I make pretty good chicken. There were two things that sold me on this recipe.  First, chicken thighs are my favourite part if the chicken because they're so juicy and reasonably priced,  Second, I love recipes where I already have all the ingredients. Ingredients: 12 chicken thighs 1/3 Cup of Dijon mustard 1/3 Cup of low-sodium soy sauce Juice from two lemons, squeezed 1 Tbs of olive oil 1 Tbs of dried fines herbes (or mix of parsley flakes, chives, tarragon, chervil leaves) 1 Tsp of fennel seeds Kosher salt (I skipped this because of the soy sauce) Cracked black pepper About 2 cups of chicken stock For the chicken: Preheat oven to 350F. Place the chicken in a single layer in a baking dish.  In a bowl, whisk 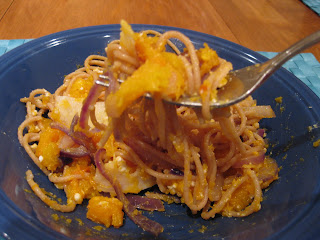 Besides cutting the squash up into cubes and roasting it, this meal is a quick and easy weeknight meal. I enjoyed the combined salty and sweet flavours from the caramelized onions in honey and the salty feta cheese. If you felt like more salt or wanted to add meat to this vegetarian dish I would add pancetta. Ingredients: Butternut squash, peeled and cut into cubes 2 Tbs of Rosemary 1 Tbs of olive oil 4-5 garlic cloves, crushed 1 Tbs of butter Spaghetti for four (or penne) 1 Red onion, sliced 1 Tbs of honey ½ Cup of chicken or vegetable stock ¾ Cup of feta, crumbled Shavings of parmesan for garnishing I didn’t have any in my fridge, but peppery arugula would be nice added to this dish at the very end before serving. Preheat oven to 400F. Peel and cut the squash into bite size cubes, place in roasting pan with rosemary, garlic and toss with olive oil. Roast for about 30 minutes or until cooked. Cook pasta in salted water until al dente, drain, put pasta back into